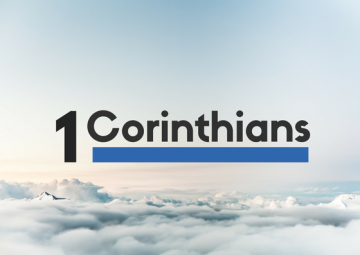 We live in a world where the Christian gospel, and the Christian church, is seen as strange, narrow-minded, irrelevant, and even dangerous. Which is remarkably similar to the culture in the important port city of Corinth in the first century AD. Despite that, A church was started there early on in the spread of Christianity - and a couple of years later the man whose preaching had started it, the Apostle Paul, wrote them a letter. While the Church at Corinth shared in the immense privileges of being Christians, nevertheless they were in many ways more influenced by Corinth than by Christ. And for the people for whom Christ died on a cross, that, says Paul, will never do. This letter spells out how, and why, the crucified and risen Son of God is an infinitely better master and guide than the cultures they, and we, live in.

The Resurrection of Christ

3 For I delivered to you as of first importance what I also received: that Christ died for our sins in accordance with the Scriptures, 4 that he was buried, that he was raised on the third day in accordance with the Scriptures, 5 and that he appeared to Cephas, then to the twelve. 6 Then he appeared to more than five hundred brothers at one time, most of whom are still alive, though some have fallen asleep. 7 Then he appeared to James, then to all the apostles. 8 Last of all, as to one untimely born, he appeared also to me. 9 For I am the least of the apostles, unworthy to be called an apostle, because I persecuted the church of God. 10 But by the grace of God I am what I am, and his grace toward me was not in vain. On the contrary, I worked harder than any of them, though it was not I, but the grace of God that is with me. 11 Whether then it was I or they, so we preach and so you believed.

The Resurrection of the Dead

20 But in fact Christ has been raised from the dead, the firstfruits of those who have fallen asleep. 21 For as by a man came death, by a man has come also the resurrection of the dead. 22 For as in Adam all die, so also in Christ shall all be made alive. 23 But each in his own order: Christ the firstfruits, then at his coming those who belong to Christ. 24 Then comes the end, when he delivers the kingdom to God the Father after destroying every rule and every authority and power. 25 For he must reign until he has put all his enemies under his feet. 26 The last enemy to be destroyed is death. 27 For “God3 has put all things in subjection under his feet.” But when it says, “all things are put in subjection,” it is plain that he is excepted who put all things in subjection under him. 28 When all things are subjected to him, then the Son himself will also be subjected to him who put all things in subjection under him, that God may be all in all.

29 Otherwise, what do people mean by being baptized on behalf of the dead? If the dead are not raised at all, why are people baptized on their behalf? 30 Why are we in danger every hour? 31 I protest, brothers, by my pride in you, which I have in Christ Jesus our Lord, I die every day! 32 What do I gain if, humanly speaking, I fought with beasts at Ephesus? If the dead are not raised, “Let us eat and drink, for tomorrow we die.” 33 Do not be deceived: “Bad company ruins good morals.”4 34 Wake up from your drunken stupor, as is right, and do not go on sinning. For some have no knowledge of God. I say this to your shame.