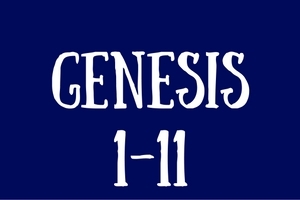 To know who you are you need to know where you have come from. That is true whoever you are - whether you are a Christian or not. Genesis, the first book of the Bible, provides the answers - whether you are a Christian or not. It was written for Israel, God's people, to teach them about their forefather Abraham, and the promise God made him to fix the whole world through his family. For Christians, then, it's about our family history. Chapters 1-11 are about what came even before that: why this special family was needed in the first place. How God made the world, his plans for it, and the disaster of human sin which engulfed mankind and led to the sorry world we all know so well. So Genesis teaches us who we really are, and how much we need God's plan to send his Son, Jesus Christ, to rescue us.

4:1 Now Adam knew Eve his wife, and she conceived and bore Cain, saying, “I have gotten1 a man with the help of the LORD.” 2 And again, she bore his brother Abel. Now Abel was a keeper of sheep, and Cain a worker of the ground. 3 In the course of time Cain brought to the LORD an offering of the fruit of the ground, 4 and Abel also brought of the firstborn of his flock and of their fat portions. And the LORD had regard for Abel and his offering, 5 but for Cain and his offering he had no regard. So Cain was very angry, and his face fell. 6 The LORD said to Cain, “Why are you angry, and why has your face fallen? 7 If you do well, will you not be accepted?2 And if you do not do well, sin is crouching at the door. Its desire is contrary to3 you, but you must rule over it.”

8 Cain spoke to Abel his brother.4 And when they were in the field, Cain rose up against his brother Abel and killed him. 9 Then the LORD said to Cain, “Where is Abel your brother?” He said, “I do not know; am I my brother’s keeper?” 10 And the LORD said, “What have you done? The voice of your brother’s blood is crying to me from the ground. 11 And now you are cursed from the ground, which has opened its mouth to receive your brother’s blood from your hand. 12 When you work the ground, it shall no longer yield to you its strength. You shall be a fugitive and a wanderer on the earth.” 13 Cain said to the LORD, “My punishment is greater than I can bear.5 14 Behold, you have driven me today away from the ground, and from your face I shall be hidden. I shall be a fugitive and a wanderer on the earth, and whoever finds me will kill me.” 15 Then the LORD said to him, “Not so! If anyone kills Cain, vengeance shall be taken on him sevenfold.” And the LORD put a mark on Cain, lest any who found him should attack him. 16 Then Cain went away from the presence of the LORD and settled in the land of Nod,6 east of Eden.

17 Cain knew his wife, and she conceived and bore Enoch. When he built a city, he called the name of the city after the name of his son, Enoch. 18 To Enoch was born Irad, and Irad fathered Mehujael, and Mehujael fathered Methushael, and Methushael fathered Lamech. 19 And Lamech took two wives. The name of the one was Adah, and the name of the other Zillah. 20 Adah bore Jabal; he was the father of those who dwell in tents and have livestock. 21 His brother’s name was Jubal; he was the father of all those who play the lyre and pipe. 22 Zillah also bore Tubal-cain; he was the forger of all instruments of bronze and iron. The sister of Tubal-cain was Naamah.

23 Lamech said to his wives:

“Adah and Zillah, hear my voice;
you wives of Lamech, listen to what I say:
I have killed a man for wounding me,
a young man for striking me.
24   If Cain’s revenge is sevenfold,
then Lamech’s is seventy-sevenfold.”


25 And Adam knew his wife again, and she bore a son and called his name Seth, for she said, “God has appointed7 for me another offspring instead of Abel, for Cain killed him.” 26 To Seth also a son was born, and he called his name Enosh. At that time people began to call upon the name of the LORD.

5:1 This is the book of the generations of Adam. When God created man, he made him in the likeness of God. 2 Male and female he created them, and he blessed them and named them Man8 when they were created. 3 When Adam had lived 130 years, he fathered a son in his own likeness, after his image, and named him Seth. 4 The days of Adam after he fathered Seth were 800 years; and he had other sons and daughters. 5 Thus all the days that Adam lived were 930 years, and he died.

6 When Seth had lived 105 years, he fathered Enosh. 7 Seth lived after he fathered Enosh 807 years and had other sons and daughters. 8 Thus all the days of Seth were 912 years, and he died.

9 When Enosh had lived 90 years, he fathered Kenan. 10 Enosh lived after he fathered Kenan 815 years and had other sons and daughters. 11 Thus all the days of Enosh were 905 years, and he died.

28 When Lamech had lived 182 years, he fathered a son 29 and called his name Noah, saying, “Out of the ground that the LORD has cursed, this one shall bring us relief11 from our work and from the painful toil of our hands.” 30 Lamech lived after he fathered Noah 595 years and had other sons and daughters. 31 Thus all the days of Lamech were 777 years, and he died.

6:1 When man began to multiply on the face of the land and daughters were born to them, 2 the sons of God saw that the daughters of man were attractive. And they took as their wives any they chose. 3 Then the LORD said, “My Spirit shall not abide in12 man forever, for he is flesh: his days shall be 120 years.” 4 The Nephilim13 were on the earth in those days, and also afterward, when the sons of God came in to the daughters of man and they bore children to them. These were the mighty men who were of old, the men of renown.

5 The LORD saw that the wickedness of man was great in the earth, and that every intention of the thoughts of his heart was only evil continually. 6 And the LORD regretted that he had made man on the earth, and it grieved him to his heart. 7 So the LORD said, “I will blot out man whom I have created from the face of the land, man and animals and creeping things and birds of the heavens, for I am sorry that I have made them.” 8 But Noah found favor in the eyes of the LORD.