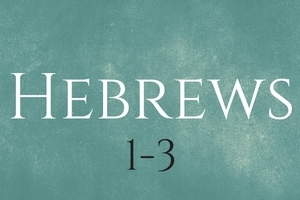 Last Talk
Hebrews 1:5 - 2:4 Jesus: The only one worth listening to
By Matthew Roberts

5 For to which of the angels did God ever say,

“You are my Son,
today I have begotten you”?


6 And again, when he brings the firstborn into the world, he says,

“Let all God’s angels worship him.”

“He makes his angels winds,
and his ministers a flame of fire.”

“Your throne, O God, is forever and ever,
the scepter of uprightness is the scepter of your kingdom.
9   You have loved righteousness and hated wickedness;
therefore God, your God, has anointed you
with the oil of gladness beyond your companions.”

“You, Lord, laid the foundation of the earth in the beginning,
and the heavens are the work of your hands;
11   they will perish, but you remain;
they will all wear out like a garment,
12   like a robe you will roll them up,
like a garment they will be changed.1
But you are the same,
and your years will have no end.”


13 And to which of the angels has he ever said,

“Sit at my right hand
until I make your enemies a footstool for your feet”?


14 Are they not all ministering spirits sent out to serve for the sake of those who are to inherit salvation?

2:1 Therefore we must pay much closer attention to what we have heard, lest we drift away from it. 2 For since the message declared by angels proved to be reliable, and every transgression or disobedience received a just retribution, 3 how shall we escape if we neglect such a great salvation? It was declared at first by the Lord, and it was attested to us by those who heard, 4 while God also bore witness by signs and wonders and various miracles and by gifts of the Holy Spirit distributed according to his will.