Talk
Greater than the Greatest Man Ever Born
Matthew 11:1-19
By Simon Arscott 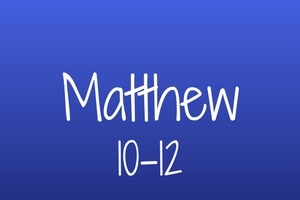 Messengers from John the Baptist

11:1 When Jesus had finished instructing his twelve disciples, he went on from there to teach and preach in their cities.

2 Now when John heard in prison about the deeds of the Christ, he sent word by his disciples 3 and said to him, “Are you the one who is to come, or shall we look for another?” 4 And Jesus answered them, “Go and tell John what you hear and see: 5 the blind receive their sight and the lame walk, lepers1 are cleansed and the deaf hear, and the dead are raised up, and the poor have good news preached to them. 6 And blessed is the one who is not offended by me.”

“‘Behold, I send my messenger before your face,
who will prepare your way before you.’


11 Truly, I say to you, among those born of women there has arisen no one greater than John the Baptist. Yet the one who is least in the kingdom of heaven is greater than he. 12 From the days of John the Baptist until now the kingdom of heaven has suffered violence,4 and the violent take it by force. 13 For all the Prophets and the Law prophesied until John, 14 and if you are willing to accept it, he is Elijah who is to come. 15 He who has ears to hear,5 let him hear.

16 “But to what shall I compare this generation? It is like children sitting in the marketplaces and calling to their playmates,