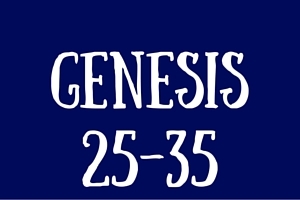 25 As soon as Rachel had borne Joseph, Jacob said to Laban, “Send me away, that I may go to my own home and country. 26 Give me my wives and my children for whom I have served you, that I may go, for you know the service that I have given you.” 27 But Laban said to him, “If I have found favor in your sight, I have learned by divination that1 the LORD has blessed me because of you. 28 Name your wages, and I will give it.” 29 Jacob said to him, “You yourself know how I have served you, and how your livestock has fared with me. 30 For you had little before I came, and it has increased abundantly, and the LORD has blessed you wherever I turned. But now when shall I provide for my own household also?” 31 He said, “What shall I give you?” Jacob said, “You shall not give me anything. If you will do this for me, I will again pasture your flock and keep it: 32 let me pass through all your flock today, removing from it every speckled and spotted sheep and every black lamb, and the spotted and speckled among the goats, and they shall be my wages. 33 So my honesty will answer for me later, when you come to look into my wages with you. Every one that is not speckled and spotted among the goats and black among the lambs, if found with me, shall be counted stolen.” 34 Laban said, “Good! Let it be as you have said.” 35 But that day Laban removed the male goats that were striped and spotted, and all the female goats that were speckled and spotted, every one that had white on it, and every lamb that was black, and put them in the charge of his sons. 36 And he set a distance of three days’ journey between himself and Jacob, and Jacob pastured the rest of Laban’s flock.

37 Then Jacob took fresh sticks of poplar and almond and plane trees, and peeled white streaks in them, exposing the white of the sticks. 38 He set the sticks that he had peeled in front of the flocks in the troughs, that is, the watering places, where the flocks came to drink. And since they bred when they came to drink, 39 the flocks bred in front of the sticks and so the flocks brought forth striped, speckled, and spotted. 40 And Jacob separated the lambs and set the faces of the flocks toward the striped and all the black in the flock of Laban. He put his own droves apart and did not put them with Laban’s flock. 41 Whenever the stronger of the flock were breeding, Jacob would lay the sticks in the troughs before the eyes of the flock, that they might breed among the sticks, 42 but for the feebler of the flock he would not lay them there. So the feebler would be Laban’s, and the stronger Jacob’s. 43 Thus the man increased greatly and had large flocks, female servants and male servants, and camels and donkeys.

31:1 Now Jacob heard that the sons of Laban were saying, “Jacob has taken all that was our father’s, and from what was our father’s he has gained all this wealth.” 2 And Jacob saw that Laban did not regard him with favor as before. 3 Then the LORD said to Jacob, “Return to the land of your fathers and to your kindred, and I will be with you.”

4 So Jacob sent and called Rachel and Leah into the field where his flock was 5 and said to them, “I see that your father does not regard me with favor as he did before. But the God of my father has been with me. 6 You know that I have served your father with all my strength, 7 yet your father has cheated me and changed my wages ten times. But God did not permit him to harm me. 8 If he said, ‘The spotted shall be your wages,’ then all the flock bore spotted; and if he said, ‘The striped shall be your wages,’ then all the flock bore striped. 9 Thus God has taken away the livestock of your father and given them to me. 10 In the breeding season of the flock I lifted up my eyes and saw in a dream that the goats that mated with the flock were striped, spotted, and mottled. 11 Then the angel of God said to me in the dream, ‘Jacob,’ and I said, ‘Here I am!’ 12 And he said, ‘Lift up your eyes and see, all the goats that mate with the flock are striped, spotted, and mottled, for I have seen all that Laban is doing to you. 13 I am the God of Bethel, where you anointed a pillar and made a vow to me. Now arise, go out from this land and return to the land of your kindred.’” 14 Then Rachel and Leah answered and said to him, “Is there any portion or inheritance left to us in our father’s house? 15 Are we not regarded by him as foreigners? For he has sold us, and he has indeed devoured our money. 16 All the wealth that God has taken away from our father belongs to us and to our children. Now then, whatever God has said to you, do.”